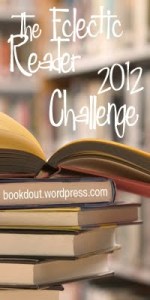 This is the first of my 2012 reader challenges, Literary Fiction – which Wikipedia defines as

The term is principally used to distinguish “serious fiction” which is a work that claims to hold literary merit, in comparison from genre fiction and popular fiction (i.e., paraliterature). In broad terms, literary fiction focuses more upon style, psychological depth, and character. This is in contrast to Mainstream commercial fiction, which focuses more on narrative and plot. Literary fiction may also be characterized as lasting fiction — literature which continues to be read and in-demand many decades and perhaps centuries after the author has died.

Under this definition I chose to read Nineteen Eight-Four by George Orwell… which (surprise to some) I have never read.

I’m not going to compete with the great reviews of this book, I am no Isaac Asimov – instead I am going to focus no how I felt when reading this book and what my life, the media and other influences have affected my reading.

So I assume you have followed the link to Isaac Asimov’s review or at least you know some the history to this classic book – quick summary. Following on from Animal Farm 1984 is the continuation of the Soviet theme of a world controlled by 3 super countries, strict controls govern everything and the party is all powerful. Big Brother is always watching…

The thing I had to get over when reading this was that to the audience in 1948 this was all new. This was horrifying and totally unheard of. For me this was a great story a great idea but one I have been introduced to many times before. Brazil is one of my all time favourite movies and yet it borrows so much from Orwell – much I have never even knew about. I knew what Big Brother was (not the TV show) but the idea of the Government watching you. Cory Doctorow’s Little Brother again uses this theme (download for free) instead for a younger audience – highly recommend this.

Needless to say 1984 did not cause me to have sleepless nights – unless you count the fact I HAD to force myself to put it down to sleep! The fear did not build inside of me – I am used to the idea of Government complete control… not in the way that I am happy for it – far from it. But the idea is not new.

So the constant reminder that this was so new and different, say to my parents generation, kept me thinking. What if I read this first, before seeing the popular culture references, before film and television… Maybe it would have been harder for me to understand the world – maybe it was a better (easier) experience for me.

I understood the concepts Orwell writes about, the Government control, the fear-control, the restrictions, the small rooms (almost communal living), the telescreen for a wall (some people have them already with the large TV’s). This was not at all unfamilar and I was therefore able to slip into the story. Into the world of Winston Smith.

Enough I have written that part to death… on to the book itself.

As afore mentioned I read this fairly quickly, having to stop to eat, sleep and that dreaded work… me thinks if all those other things had less importance it may have been read in one sitting – I think that qualifies that I liked the book.

Orwell’s style is very easy, third person but only following Winston and his sad existence within the tight confines of control. Orwell has not just placed his story in a different or potential world, he had created this universe – an alternative reality. The Appendix on “The Principals of Newspeak” is akin to Tolkien’s Elvish language (a stretch I know but it has a similar vein). In other words he didn’t just plonk the characters into the world they are the world and the world is them…

But this world is our world – or at least the potential world from the view of 1948, and it is the familiar things that makes the difference. The pub on the corner, the artefacts Winston ‘finds’ and the country side all let the reader know that Airstrip One is England.

The way this modern (for the books release) world is hinted at make 1984 more real and less of a fantasy. I can see that Orwell really wanted to stop the tide of the Socialist and the evil he saw it represent.

Unfortunately in this current world the opposite side is almost making Airstrip One a reality. Big Brother has started to watch us, the media spreads the fear through shows like Today Tonight and A Current Affair. Is text speak Newspeak? Corporations and not Government have much of the control over the world. We might not see it as clearly in Australia as in some other countries – however the way the mining companies are working to create fear over things like the mining tax show that they have some power…

I believe that reading 1984 was a MUST, however I would not change the timing – I think I got more out of it because I knew and understood the world Orwell writes about. I didn’t have to waste time getting my head around the concepts. 1984 is a world I want to avoid and I hope you do too, but one I like to read about… if for no other reason then to remind myself what I want to avoid.

The Girls and their Hip Hop friends at @sdstudios_ set themselves the goal of busking this holidays to raise $5000 for the Bushfire Disaster Appeal. So proud to share that as of today, they’re only $283 off their goal! ❤️🚒 Beyond proud of the kids for their kind hearts and wanting to help. #ItsNotAllAboutTheTrophies #DanceWithYourHeart #HelpOthers #dancersofinstagram
Smoocher 🥰 #bordercollie #bluebell #bordercolliesofinstagram
Rip buddy 💔x