This week was totally consumed with chemotherapy. Ben had to go everyday at 9am, sit in a hospital chair, while his body was effectively fed poison, again, and again, and again. He’s been amazing: sleeping lots, woozy and weak, but every minute he feels well enough, he’s helping out or playing with the girls.

I feel so bloody helpless. All I can really do is make him food/drink, let him sleep, check he’s remembered whatever pill he’s due for, and exit the kids whenever possible so he can have some peace! Phew. It’s tiring and emotionally pretty hard. And this is only after week one. 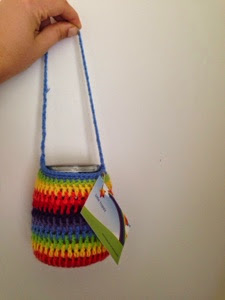 On the Friday I booked both the kids into care, and went with him to keep him company for the few hours in the ward. I watched the nurses come and go: Efficient, professional, and endlessly paitient. I listened to the 93-year-old platelet-recipient in the next chair (“and he says to me ‘what are you in here for?’ And I say, ‘I think Im pregnant’. And then he looks at my paperwork and says ‘*insert medical term here*: I’ve never heard of that!’ And I said, ‘Well it’s probably never heard of you either!’…).  And I crocheted 2 tealight lanterns to sell at some local markets on a friends’ stall.
And I won a free knitting pattern over at Foxs Lane! Woohoo! Another project! I’m thinking a beanie for a certain husband who might need a head warmer/sun-protector soon…
Some people do chemo for YEARS. Thankgod for us, it should only be 9 weeks. HOPEFULLY. 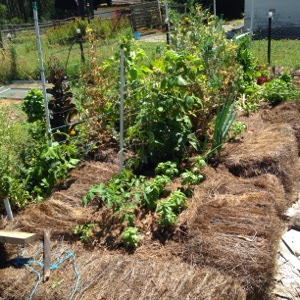 But the garden, it doth provide. It’s all wild and going to seed now. But we still pick cherry toms, basil – loads of that!, lettuce, leeks, spring onion, spinach, corn, oregano, and parsley. Soon, we will hopefully pick our first Grosse Lisse tomatoes, cucumbers, beans, carrots, rocket, and more beetroot. 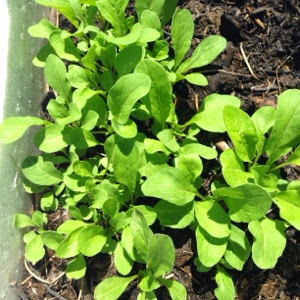 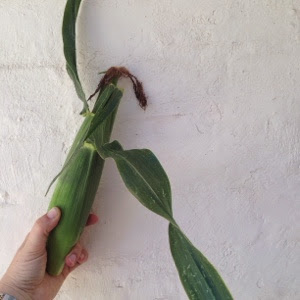 We were so proud of our spotty apricots (BEST JAM EVER. SERIOUSLY!), our “Accidental we-thought-they-were-ornamental-but-they’re-not-actually-they’re-just-undersized Plum Jam” and our poor bent apple tree’s 4 little green apples (I juiced em before the birds ate ’em!) . But our figs are so disappointing. They’re HUGE! We had high hopes! But inside they’re dry and completely tasteless. And before they get a chance to go really black, they get eaten (but not by us.). It’s not looking good. I dont know whether it’s because they dont get a chance to go fully ripe, or because the whole massive tree (well over 12 ft!) appears to be thriving from between 2 concrete slabs in an old garden bed and is deprived of water/nutrients/space..? However, every chance it gets, it send out new shoots, and it is massive and loaded with fruit, so I figure it cant be fareing too badly! Truly, you wouldn’t believe the mutant base of this tree and where it’s growing from. Isn’t nature’s resilience amazing?! 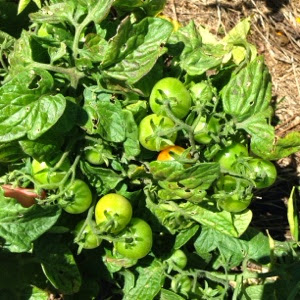 And can we recommend SWEET BITE as a cherry tomato variety?!?! Holy crud, these guys PRODUCED! For such a compect little bush (I’m talking balcony-pot-plant size!) they are LOADED with fruit, and the girls snack off those 2 little bushes every day! Highly recommended!

And our poor chookies appear to have… um… colds?! I’ve noticed a few looking listless, and they appear to have ‘snotty’ beaks and bubbly eyes… OMG – what?! You guys cant be sick too?! So Im frantically googling and I’ve added some garlic granules to their drinking water. and I swear I saw some lice on one of them… (There’s probably a pill for that.)

So tonight I’m listening to the wild wind, contemplating a shower and the washing up, googling chook antibiotics, wondering WHY THE HELL Katie isn’t going to sleep, drinking tea, savouring a belly full of cauliflower crust pizza (TRY IT), feeling grateful to live in a country that offers subsidised childcare in difficult circumstances, and trying to breathe deeply and evenly.

One day at a time.